As best I understand it, the theory of six degrees of separation holds that between everybody on the planet,  there are connections – really not very many – that would be easy to follow if we could only see them. These connections, if known, could quickly link us all up, like kids with their sleeping  bags in a circle at a slumber party. 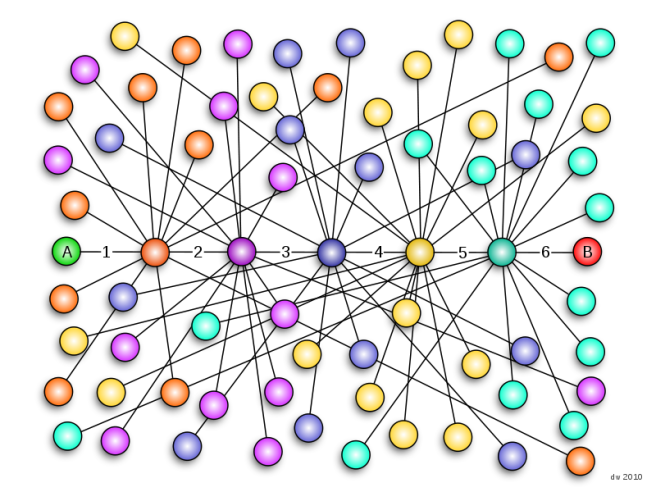 I like to play a kind of mental game sometimes, imagining how I’d go about inviting certain famous people – like Barack & Michelle Obama, for example – to dinner. Where would I begin? Who do I know in politics? In Washington, D.C.? Sometimes I can come up with a chain of contacts who could conceivably pass along a dinner invitation, and other times, like today, I hit a wall. (Years ago I did interview the late Ted Kennedy, and he did give me a cold soda.)

But one thing I never expected was that a certain crusty and yet loveable Irishman, the late Amherst blogger Larry Kelley, would be my sole interpersonal link – across more than a century of lives – to perhaps the world’s most influential poet, Emily Dickinson.

I actually owe Mr. Kelley an apology, (and do not know how to postmark it) for publicly doubting his claim of an historical tie to Miss Emily. When I first heard the tale, that Larry’s great-great-grandfather was an Irish immigrant who became the poet’s beloved servant, I strongly suspected Larry of kissing the Blarney Stone, although I thoroughly relished the story.

Larry’s death in an auto accident on Feb. 17 got me reading his blog posts that I had missed, and thus finding more information, and evidence supporting his claim.  (A link to one of Larry’s posts about his ancestry can be found here: http://onlyintherepublicofamherst.blogspot.com/search?q=tom+kelley.) Curious gal that I am, I also read other things – excerpts from history books – which refer to Kelley’s great-great-grandfather, Tom Kelley, as a longtime, dependable, and ultimately significant figure at the Dickinson Homestead.

Although Tom Kelley was an amputee with one arm, he was nonetheless the chief pallbearer at Miss Emily’s funeral, apparently in fulfillment of the poet’s request before her death. (Tom Kelley had lost the arm after being injured in a fall from the roof of a hat factory.)  One can guess at how the poet imagined her own funeral, and her belief in the uncompromised strength of the one-armed man. We can only speculate about the gossip her choice might have engendered, in the era of Irish-Need-Not-Apply.

The book about Emily Dickinson called “Maid as Muse” by Aife Murray contains the photo below, and identifies Tom Kelley as the man with the glasses  in the upper left corner. One might even note a slight (very slight?) family resemblance to Amherst’s late blogger.

Historian Dineen Wardrop delved fairly deeply into the connection between the Dickinsons and their Irish servants, including Tom Kelley, in  her book “Emily Dickinson and the Labor of Clothing.” If you copy and paste this URL into your browser you can read the relevant section:

As you will read, Tom Kelley was apparently someone that Emily Dickinson trusted and could go in times of crisis, once writing of him:

“I ran to his Blue Jacket, and let my Heart break there – that was the warmest place.”

Larry had been honest in his reporting about this, as he was about other things.

I only got to know Larry, in a limited way, during the last year or two after I got involved with Town Meeting and the group Save Amherst’s Small Schools. I would contact him fairly often to hash over local politics and ask for insights, and found him receptive and helpful. We became friends on Facebook, where besides sharing his blog, Larry would post incredible photographs to over 1,000 followers. He took many of these photos by sending his pet drone, “Birdie,” out over Amherst on fine days, when a thick and magical mist on the hills, or a stunning cloud formation, yearned to be immortalized.

“There is another sky,

Ever serene and fair,

And there is another sunshine,

Though it be darkness there;
Never mind faded forests, Austin …

I hear the bright bee hum:
Prithee, my brother,
Into my garden come!” – Emily Dickinson

In thinking about these photos, I realized something. There was poetry in Larry Kelley. Although he spent a lot of time in recent years at the courthouse,  fire scenes, the police station or Town Hall – and despite his sometimes gruff demeanor – he deeply appreciated nature’s beauty.

So what I’ve decided to do here, in Larry’s honor, is create a kind of convergence, which has a valid historical justification.  Below are some of Larry’s photos, and with each of them, an excerpt from Miss Emily’s poems. And let us also hope that Tom Kelley has already introduced their souls to one another, in that place where spirits gather.

“Blazing in Gold and quenching in Purple

Leaping like Leopards to the Sky
Then at the feet of the old Horizon
Laying her spotted Face to die
Stooping as low as the Otter’s Window
Touching the Roof and tinting the Barn
Kissing her Bonnet to the Meadow
And the Juggler of Day is gone.”  – Emily Dickinson

Of Robins in the Trundle bed
How many I espy

But then I promised ne’er to tell—
How could I break My Word?
So go your Way—and I’ll go Mine—
No fear you’ll miss the Road.”  – Emily Dickinson

“Some Rainbow—coming from the Fair!

Some Vision of the World Cashmere—
I confidently see!
Or else a Peacock’s purple Train
Feather by feather—on the plain
Fritters itself away! …

Behold! Whose Multitudes are these?
The children of whose turbaned seas—
Or what Circassian Land?” – Emily Dickinson

One thought on “Another Angle: Emily Dickinson, Larry Kelley, and the Poetry of Drone Photography”